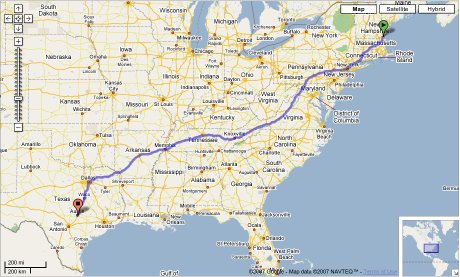 Austin, via Houston, via Memphis, via Boston . . .

I’m visiting the new Optaros office in Austin this week. Who knew it could be so challenging to get between two major US cities?

There was really no direct flight that was going to make this easy.

JetBlue seems to have exactly one direct flight each day from Boston to Austin, leaving at 6:30am, and getting to Austin at 10:10am. That’s great, letting my fly on Monday rather than Sunday night.

The problem is, coming the other way, JetBlue’s only direct leaves at 10:50am and gets to Boston at 3:40 – which means losing a whole working day to travel, effectively.

So, I went with Northwest and a one hop through Memphis. Seems that was a bad idea.

Turns out that with headwinds, the Boston to Memphis hop was 30 minutes late – plane took off on time, but couldn’t get there fast enough, so landed roughly 40 minutes late.

Instead, I was directed to the “Northwest Customer Service Counter,” where I waited 10 minutes for someone to show up and provide some service. She was able to get me on a flight to Houston, with “hopefully” a connection to Austin from there.

Get on the Houston flight, only to sit at the gate for 30 minutes while they deal with a maintenance problem. The captain actually comes on the intercomm to tell us that the circuit breaker in the fuel pump tripped. But it’s just “a paperwork issue.” (I’m no aerospace engineer, but doesn’t the fuel pump sound important? Isn’t that something I would not want to fail between Memphis and Houston? Why tell me that?)

Get to Houston, figuring that by now I’ve missed my Austin connection. Luckily (in the sense that I’d rather fly late than not at all) the Austin flight is late too.

In the end, I got to Austin safely, via Houston, via Memphis, via Boston (starting in Newburyport MA where I live). I left Newburyport in the afternoon, Eastern time, and got to the Austin airport at 12:30 am the following day, Central time. Ouch.