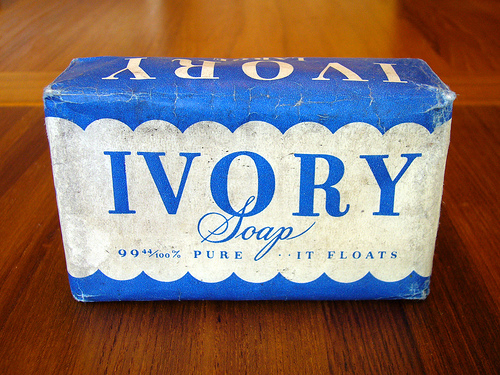 99.44% pure. Photo by Stewf, cc-by-nc-sa license, click through for details. (And yes, it is ironic that Ivory soap is not vegan - contains animal fats)

Lots of (well-intentioned I’m sure) vegan and omnivore friends over the last month have sent me links to Quarrygirl’s investigative report on animal product ingredients in food purchased from self-declared vegan restaurants around LA (Operation Pancake).

While I certainly share a desire to get what I order, and to have both menu descriptions and waitstaff knowledge accurate as to what food does and doesn’t contain eggs, dairy, or other animal products, something about the whole report (and the excitement/energy/enthusiasm around it) just seemed fundamentally wrong.

Certainly part of the feeling was the irony that my omnivore friends were “alerting” me to potential trace ingredients in otherwise vegan food – while they continued to deliberately and explicitly order food with those same ingredients in quantities orders of magnitude higher. Of course, given that I’ve self-identified as vegan, one could argue they’re simply alerting me to issues they would expect me to be interested in. Still, given the prominence of E.coli, Salmonella, Bovine Growth Hormone, fecal matter, antibiotics in large quantities, and other contaminants in the Standard American Diet, the irony of alerting the vegan community about food contamination seems quite rich.

Kudos to Erik at Vegan.com for explaining so clearly the real reason why I felt this energy was misplaced (Nonvegan Vegan Restaurants).

In most cases where a vegan meal tested positive for animal products, the amount present was truly miniscule. And it appears the contamination comes, not from the restaurant, but from the factory that produces the mock meats or processed food ingredients.

This doesn’t mean that contamination isn’t important, and worth watching. But it’s a question of priorities. How much energy in the collective vegan / animal rights movement went into this rather than focusing on more productive activities?

The amount of animal products involved in this story is so minimal that just twenty minutes devoted to leafletting outweighs the effects of a lifetime of eating at questionably vegan restaurants. So let’s focus on what’s important: keeping as many animals from harm and working toward the day when animal agribusiness no longer exists.

Yes, it’s annoying that some vegan restaurants (or more accurately some vegan faux-meat suppliers) aren’t 100% pure. They should be, and it’s good to monitor them and keep them honest.

But we shouldn’t let the goal of personal purity (eliminating 100.0000% of potential animal contaminants from our diet and lifestyle) overwhelm or take importance over the goal of activism: speaking truth to power, making clear to people the impact of the choices they make everytime they order or make a meal.

“In any nonviolent campaign, there are four basic steps: collection of the facts to determine whether injustice exists; negotiations; self-purification; and direct action.”

We’ve got to avoid getting stuck at step 3. Let’s keep vegan suppliers honest, of course, but it’s far more important to get people asking for vegan food than it is to spend our time increasing the purity of that food from 99% to 99.9%.