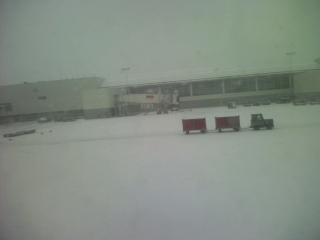 I was in Detroit, Michigan earlier this week. (I hear many folks now describe this area as “southeastern Michigan” rather than “the Detroit area” – to avoid scaring away the out-of-towners.)

Given how mild the New England winter’s been (so far) it was nice to see some actual snow on the ground: What’s odd about the Detroit Metro Airport is that it has multiple terminals – McNamara, Smith, and Berry – but that each of the terminals treats itself as if it were the whole airport.

None of the signage anywhere in the McNamara terminal, where Northwest has its major hub, mentions in any way the fact that any other terminals exist. There are lots of good maps, showing where every bathroom, restaurant, shop, transportation option, and gate is, and the most effecient way to get from one to the other, but not a single mention of the other terminals or the fact that other airlines actually fly into the same airport.

I finally had to ask someone, since I was expecting a colleague coming up from Chicago on Southwest. Turned out the easiest thing to do was just to meet at the rental car outlet. (There is, I understand, a Terminal-Westin-Terminal shuttle, which can get you between terminals – by it looked like a shuttle to the hotel to me).

Is it typical for an airport to treat itself as a walled garden? Have I just never noticed?

By contrast at Logan, which is served by just about every airline but is no one’s hub, it can be difficult to find much of a map of anything, and yet it is pretty easy to find references to the other terminals and how to get between them.

Is it that rare to have a need to move between airlines?