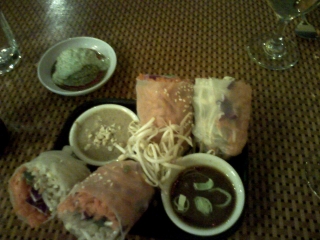 My wife and I had dinner the other night at the Organic Garden in Beverly (map).

It’s an all vegan, raw food restaurant, with a focus on organic ingredients – including organic wine and beer.

For appetizers, we tried the Spring Rolls and a Falafel Ball with Cucumber Dill Dressing: The Spring Rolls were wonderful – interesting texture, good mixture of flavors, very very fresh. The falafel was spot on, though the serving is small (this is a side, not an appetizer).

For dinner, I had the Dos Tacos (which doesn’t seem to be on the online version on the menu yet): Jo had the Thai Dumplings with Teriyaki Stir Fry: Both were excellent, though I think mine was better. It’s amazing what they are able to do with no dairy, no processed food, and without heating over 118Ã‚Â°!

Finally, for desert, I had one of the daily specials, which was an Almond Chocolate cake: (Remember, this is with no dairy!)

And Jo had a chocolate macaroon: We left wishing only that the restaurant was closer to home. I tried to figure out how I could get up to Beverly for lunch – you could certainly walk to the restaurant from the Beverly Depot commuter rail station – but I think the schedules midday would make that pretty near impossible.

Guess we’ll have to settle for meeting halfway (on my commute home from Boston) for now.