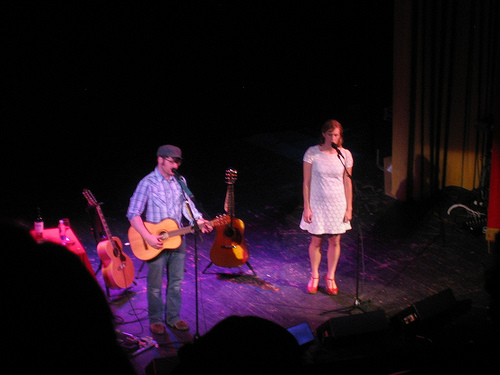 Although our seats weren’t as good this time as they were for Eels, Gibson and (especially) Meloy put on one heck of a show. (More photos in the set)

Gibson’s opening set was charming and delicate, but honestly a bit flat. She’s got a lovely voice, compelling lyrics, and intriguing song structures, but there just isn’t much stage presence yet. Definitely worth checking out, but I’m not sure she’s ready for headliner status yet.

Meloy, on the other hand, is a commanding stage presence. Of course he’s playing to a packed house of pretty invested fans – at one point Meloy broke into a bit of West Side Story (or was it Guys and Dolls?) during his between song banter and said “That’s only the second time I’ve done that, and I think the first might have been in Boston as well.” A voice from the audience answered back – “It was, and it sounded good both times. It was at TT The Bears.” At another point, as Meloy prepared to leave the stage for the obligatory pre-encore absence, a voice called out “Stay with us forever, Colin.”

Meloy played some “work in progress” – a two part song whose first part was about a mother sending her son Avery off to work in a dangerous mine, and the second part was about a funeral (though we seem to be burying Dave in the funeral, not Avery). He also did a lovely duet with Gibson on Sam Cooke’s Cupid. (Noting that his last two solo-tour-albums have been Colin Meloy Sings Morrissey and Colin Meloy Sings Shirley Collins, he said he wanted to cover someone a bit less Anglo this time.)

A number of Decemberists favorites also dotted the set – California One / Youth and Beauty Brigade, The Sporting Life, Shankill Butchers, The Apology Song, O Valencia!, The Crane Wife, and a resounding encore finale of The Mariner’s Revenge Song, complete with audience participation (the mother’s part).

Meloy’s also quite the comedian, bantering on stage, being self-deprecating and having fun – in response to audience requests he said he’s on the board of “Musicians Against the Calling Out of Freebird” as well as the chair of a splinter group devoted to encouraging the production of songs about gypsies.

He always manages to have a great time, and encourage the audience to do so as well, without taking himself too seriously but also while being very earnest about the music itself.