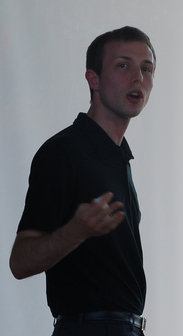 Some days it’s really difficult to understand the depths of human cruelty and hatred. Today just became one of those days for me, as I read about the recent attack on Mercy For Animals founder Nathan Runkle.

From the press release issued by MFA:

Although I’ve only known Nathan from the distance – as a supporter and fan of his activism – it is truly disheartening to see someone so focused on simple, peaceful, mercy-driven actions be the victim of such violence.

Mark Hawthorne, Striking at the Roots:

Nathan is one of the kindest and hardest-working activists I know, and I am heartsick beyond words that anyone would hurt him.

So, if you’re somebody who cares about or works on LGBTQ issues but has not (yet) integrated the animals into your analysis of oppression, let this attack on a gay man who has dedicated himself to animal rights motivate you to educate yourself about the connections. And, if you’re a straight animal liberationist or veg*n advocate who hasn’t thought deeply about your heterosexual privilege and what obligations you might have to divest yourself of that, let this near-deadly attack on a gay animal advocate remind you (if Proposition 8 and Obama’s selection of a homophobic preacher to speak at his inauguration did not) that homophobia is still alive and dangerous.

All I can say is that this kind of behavior is exactly why, president-elect Obama, it is more than just an insult to have Rick Warren at the inauguration, and why the recent anti-gay legislation in California, Florida, Arizona, and Arkansas is not to be taken lightly or as a matter of “polite” politics.

Check out the MFA Year in Review 2008 video.