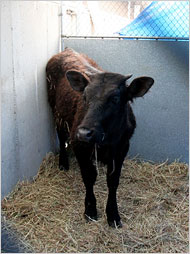 Save that One, Screw the Rest? Molly (Photo from NY Times - click through for original)

It never ceases to amaze me how, when one cow (or goat, or pig, or chicken, or turkey) escapes from the slaughterhouse, the public at large want to save him/her, but then don’t recognize how their own eating habits put said animal in that position in the first place.

This week, Molly (so named by the workers at the Brooklyn shelter to which she was transferred) escaped from a slaugherhouse in Queens, running for her life, according to the NY Times:

After decamping from the slaughterhouse, the heifer made a mad dash along 94th Avenue, turned at 150th Street, and again at Liberty Avenue, witnesses said. She passed other slaughterhouses — for goats, lambs, chickens and turkeys.

Luckily for Molly, she’ll likely (the story suggested, but was inconclusive) be headed to Farm Sanctuary in Watkins Glen, where she’ll receive excellent thoughtful care for the rest of her natural life.

What do we learn from this? Here’s what the NY Times article concludes:

Adam Khan, 47, a truck driver who lives in a house near where the calf was captured, said the episode “tells you something.”

The heifer, he said, “didn’t want to get killed.”

You know what? None of them do. If more people would eliminate animal products from their diet, we wouldn’t need any more “rescue” stories. I love a good rescue too (and hope to meet Molly on our next visit to Farm Sanctuary) but we have to remember that for every rescue billions of other animals arrive “successfully” at slaughter.

The choice you make with every meal is whether you are on Molly’s side or you are subsidizing her slaughter. It’s that simple.