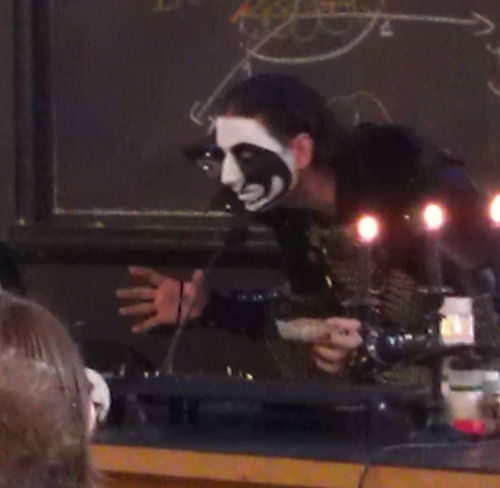 This weekend I was lucky to attend ROFLCON III, the third (and reportedly final) version of the internet culture conference at MIT.

Although Hannah confessed she wasn’t actually going to get drunk during the demo (it was only 11am on a Saturday morning), she was funny and engaging throughout, helping Brian (in full Vegan Black Metal Chef garb) make a Seitan Buffalo Wrap. Jon from Scanwiches did scan the final product, and showed the crowd, but I haven’t seen it show up on the site yet. Not sure it will make the cut – he seemed very particular about what he will or won’t post. I was obviously most interested in the Vegan Black Metal Chef, who shared some interesting details. First, he films everything at night, by candlelight, so he doesn’t start taping an episode until like 10pm, and tapes through the night until the following morning. He also creates (writes and records) all the music for each episode, and does all the video editing. Guess this is why the episodes don’t come very frequently!

People lining up to taste the Buffalo Seitan, while @scanwiches preps it for scanning

Check out episodes of Vegan Black Metal Chef on YouTube.