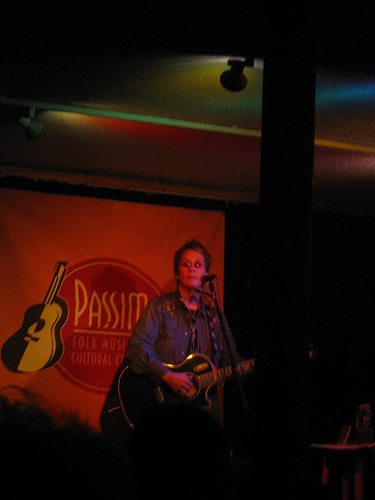 (Sorry the photos are so dark – I find flash photography at shows like this annoying so I try to stay away from the Flash). A few weeks back Jo and I caught Mary Gauthier at Club Passim in Harvard Square. Passim is an excellent place to see anyone – a folk club about to celebrate it’s 50th anniversary, with an all vegetarian (and vegan friendly) restaurant (Veggie Planet) to boot.

Gauthier played mostly new songs – no “I Drink” or “Drag Queens and Limousines” in this set, and seemed quite honestly upbeat. She joked a lot about the often depressing tone of her songwriting, growing up in a small town in Louisiana (I forget the town name, but she quipped “I later found it that’s French for Purgatory”), and relocating to Nashville to try to make it as a professional.

While there were fewer hair-standing-on-end, aching, intimate moments as in some ealier times I’ve seen her play – like the unmiked, standing in the crowd, hushed acoustic “I Ain’t Got No Place in this World Anymore” which ended her set a few years back in Maynard – it was fun to see her having a good time.

The closers – a funkified, rocked out, jamming version of “Wheel Inside the Wheel” which may have actually turned it into one of my favorite Gauthier songs, and a soft, slowed down “Mercy Now” – were for me the highlights of the night.

Mark Erelli, who accompanied Gauthier throughout the night, also did a few solo songs, though frankly I found it a bit distracting, as though the opening act interrupted the main preformance. He was an excellent sideman – filling in with some guitar flourish without ever interfering with Gauthier’s timing or vocal approach, and harmonizing well – I just didn’t need to hear his set in the middle of Gauthier’s. (To be fair, she insisted he do so – and I understand the gesture – but it did feel a bit like a commercial break).
There was also a good review that ran in the Boston Glob – “Mary Gauthier is at home in dark places” – which captured most of the mood, but they still found it rather dark:

That ended the happy portion of the show; “the rest,” said Gauthier, “is miserable.” She was joking, but she wasn’t lying. Gauthier is a singer of sad songs, one who dwells, she pointed out before singing the title song of her new record, in the sad space between the daylight and the dark. The songs she drew from her latest – from the ominous “Snakebit” to the struggles and spirit of perseverance articulated in “I Ain’t Leaving” – showed that she remains an unparalleled practitioner of the alchemy of wringing beauty from misery.

For me, this time, it seemed like the darkness was overwhelmed by Gauthier’s sense of being at peace and contented, even while seeing darkness all around her. Seemed like she was starting to wring some happiness out of all that misery too.