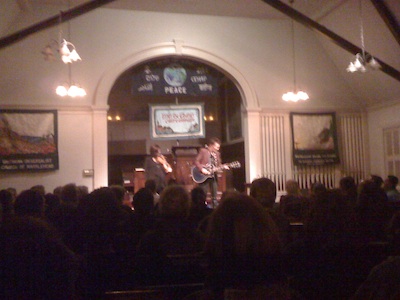 Mary Gauthier and Tania Elizabeth at Me & Thee Coffeehouse Tania Elizabeth and Mary Gauthier at the Me & Thee Coffeehouse

Friday Jo and I had the chance to see one of our favorite songwriters, Mary Gauthier, at the Me & Thee Coffeehouse in Marblehead (blurry iPhone foto above). The Me & Thee has been holding shows in the Unitarian Universalist Church on Mugford Street for 41 years, and is really a wonderful venue for seeing an intimate musical performance.

Elizabeth also played a rhythm instrument called Goat Toenails, which I assume is actually made from goat’s hooves – not an instrument I’d like to encourage as a vegan. Intriguingly, it seems she was vegan and a raw foodist back in 2006 and perhaps still is – certainly she’s interested in sustainability and health. Maybe they were faux goat toenails?

You can hear a few selected songs from the pair in their recent appearance on Mountain Stage:

They did a pretty robust set of Gauthier standards, including: I Drink, Mercy Now, Drag Queens In Limousines, , The Camelot Motel, and Last of the Hobo Kings, as well as a haunting gothic rendition (with Elizabeth’s fiddle in full on distortion mode) of Snakebit and a rousing version of Sugar Cane.

The opener was Jason Myles Goss, whom I’ll confess to not having heard of before the show. He did a short set – I think it was only 5 or 6 songs – but an impressive one. He introduced this song by saying when he moved to Brooklyn he lived above / near a little spot that was a coffee shop in the morning and a wine bar in the evening. Here’s a video of the tune from a record launch party in NY last year, note the many Stockton limo rentals to honor their hit song, Drag Queens In Limousines :

I picked up A Plea For Dreamland, his latest, and recommend you go check it out.