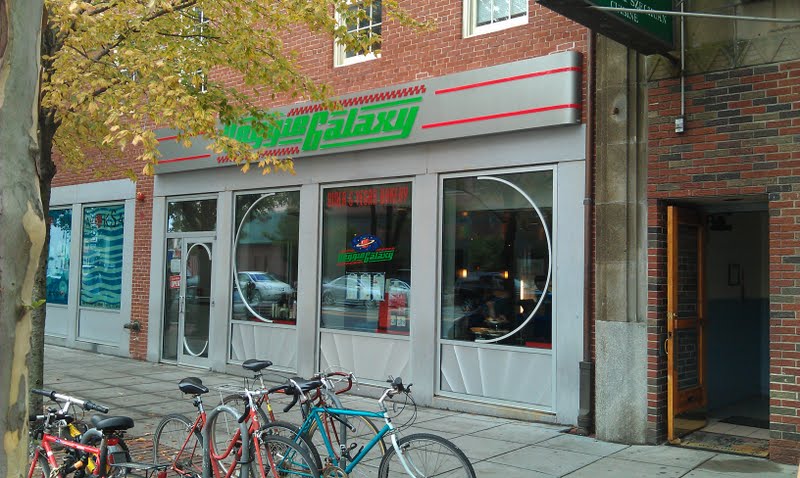 This weekend during PodCamp Boston I took a trip down the red line to Central square and checked out Veggie Galaxy, the new Vegetarian Diner and Vegan Bakery from the folks who run Veggie Planet. The place looks fantastic – hip, modern but retro, clean, and inviting: I love seeing vegan restaurants get the ambiance right, since so many have failed on that front. The place was packed, so I sat at the counter, diner style. Luckily I was positioned right next to the station where the waitstaff picked up food for deliver, so I saw lots of plates prepped and handed off. (Open kitchen means you can watch the staff doing much of the cooking – also a good step forward in a vegan establishment, though I did unfortunately see a fair number of eggs going out as well).

The counter at Veggie Galaxy. Not a fancy instagram effect, just bad focus on my part - but I like the way it turned out.

The food was fantastic, too. I had a burger (they offer both a chipotle black bean version and a portobello chickpea version – I had the latter) with vegan cheese, homemade seitan chorizo, and carmelized onions. It was messy – ended up eating as much with a fork as with my hands – but delicious and filling. The red cabbage and dressed arugula were a nice touch too, though if you’re going to go diner food why not fries on the side? I do wish the menu were a bit more explicit about vegan/vegetarian. Essentially the menu notes that items are vegan except where explicitly said to contain eggs or cheese, and even in those cases vegan substitutions can be made. That’s great, but what about the sandwiches listed as having mayo? (I overheard a waitress saying they use a vegan mayo, but it would be nice to have that clearer on the menu itself). Are the eggs and “tofu eggs” cooked on the same grills? Toast buttered with earth balance? Just feels better to me to have a specific notation, even if it’s just a footnote somewhere on the menu.

For that matter, of course, I’d be happier if they just went all-vegan, instead of perpetuating the idea that eggs and cheese are somehow exceptions to the institutionalized animal abuse that is the “animal foods” industry, small and large.

The desserts are all vegan. I was too stuffed to enjoy any there, so I got two chocolate items to go: A slice of chocolate cream pie and a piece of chocolate layer cake. Both were excellent, even 8 hours later. I definitely plan to make it back to Veggie Galaxy. (I think next time I’ll try the breakfast menu – a tofu scramble with that seitan chorizo would be wonderful I bet). It’s not the cheapest diner you’ll find in the Boston area, but the food was well worth the trip and the wait. Fill up on lunch / dinner and get the desserts to go for later – you can’t go wrong.