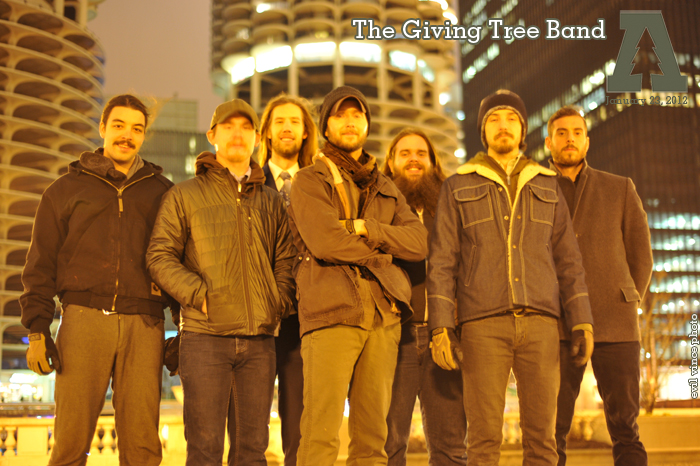 I actually found The Giving Tree Band via a feature on them in the January VegNews, which highlights their commitment to the environment (the article itself doesn’t seem to be on the web yet):

Much like the memorable Shel Silverstein book that inspired their name, this septet aims to meld accessible artistry with a powerful message about interconnectedness with the environment. While many artists and musicians fancy themselves sustainable for driving a Prius or buying organic carrots, GTB takes it to the next level—biodiesel-fueled tours, biodegradable CD packaging, and a tour manager who moonlights as a vegan chef are just the tip of the iceberg.

Right now, on the band’s site, you can get a bundle of all three albums for digital download for just $24.99.

They’re also among the (planned) contributors to Home on the Range, a benefit CD for Compassionate Farming Education Initiative:

Home On The Range is a benefit compilation CD presented by CFEI. Our mission is to raise funds for several non-profit farm animal sanctuaries including Woodstock Farm Animal Sanctuary, Happy Trails Farm, Animal Acres, Catskill Animal Sanctuary, Sasha Farm and Kindred Spirits Sanctuary. Proceeds from the sale of this CD will be donated directly to these organizations that depend on private contributions to rescue, feed, care for and provide a safe shelter for abused and neglected farm animals.

The benefit CD is unique in the fact that it is comprised entirely of established vegetarian and vegan recording artists, promoting compassion while raising public awareness and helping educate people about these issues on an unparalleled global scale. Featuring eco-friendly packaging and includes CFEI’s exclusive “Compassion 101”, an accompanying comprehensive educational booklet and resource guide. The CD will be released internationally with both physical and digital distribution in Spring 2012.

Check out the Audiotree Live session (above) and the download bundle, the Home on the Range CD, and look for tour dates near you.